Possible engine changes and their impact on our plans

The game is a 64-bit executable

Double Dealing Character, which generates SSE2 instructions per default (which threw me off for 2 hours when preparing the binary hacks for the trial version), flipping the "64-bit switch" is the most scary compiler-related setting that is yet to happen.

Portability to 64-bit wasn't exactly of interest when writing thcrap, due to its nature of being a just-in-time memory patcher targeted exclusively at some 32-bit games. However, adding 64-bit support has become a lot less scary as of 2017:

So we're actually pretty prepared in case this does happen after all. Bring it on.

Unlike SSE2 which is available in every CPU built after 2003, a 64-bit build is nothing you enable just because you can - the entire operating system with all APIs need to be 64-bit as well.

Thus, if we assume the data of Steam's monthly hardware survey to be an accurate representation of OS distribution among gamers, 6.69% (as of May 2017) of ZUN's potential audience would not be able to play the game if it was 64-bit.

As of May 2017, Windows XP now has a market share of 0.88% in the Steam survey. The Unity hardware stats always show a higher number for XP, which is currently at 6.5%. The Unity number is probably the more significant one for us, since Unity engine games seem to be more prevalent in China and developing countries[citation needed], which we probably should care about, with Touhou Patch Center's international focus.

ZUN is still de-facto "supporting" XP as of

ZUN suddenly starts to think that .NET is a good idea

Yeah, right, and throw away all the work in his STG engine, which has been gradually evolving since 2002. (A lot of the bad coding practices you see in ZUN code, and that we have to fix as part of thcrap support, have been there since

(Not sure how FUCKED we'd actually are in this case, though.)

(We might want to take a look at https://github.com/MonoMod/MonoMod then) 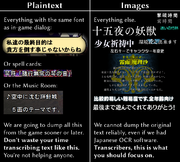 Plaintext vs. Images
To further speed up the progress, certain tasks can be done by non-developer volunteers. These are marked in green and prefixed with ND: (non-dev) below, so that you can easily Ctrl-F for it.
The only thing required for this is some sort of webfolder software that allows the quick sharing of files. Something like Dropbox.
Tasks that can only be performed by developers with direct access to the thpatch.net server (webmasters) will be marked in red and prefixed with SERVER: so those you can easily CTRL-F for that as well (and for red-green color blind developers).

Steps 1 and 2 are required for every official version of a game.

This is not necessary for the patch itself, only to ease the work of the translators.

Seriously, this new game should mostly just be a copy-pasta of the last one.

As of September 2021, Relyze and Ghidra are free-to-use reverse-engineering tools that come with signatures for recent Visual Studio versions, and can therefore show function names for a statically linked Visual C++ runtime, though Relyze might encounter licensing issues. These are the symbols that will be important:

Make sure you have dat_dump set to a path (e.g. "dump") in your run configuration, otherwise thcrap won't actually dump anything from the game.
Also, actually run under thcrap, always.

With these breakpoints, we now have a on-the-fly data dumper, without having to know anything about the .dat format. And since we don't actually care about thdat, the enabler of static .dat patches… let's just write a small chunk of assembly to dump it all!

With these values, search a nice spot, adjust and paste the code somewhere, and jump to it.

If it didn't work, take a close look at the calling convention of arc_load, and adjust the code above accordingly. If everything went well, this also indicates no relevant ANM format changes. Ship the file breakpoints if that's the case, or update the ANM patcher in case thcrap crashed while trying to dump the sprite boundaries.

Step 5.1: Trophies and other stuff

Wily Beast and Weakest Creature and

Unconnected Marketeers created a pattern that trophies might become a main staple in the future.

ND: Look for files called trophy.txt or similar, and do the same as with musiccmt.txt, using a Trophy page as reference.

For the longest time, I was terribly scared of those… but once I did the implementation, it actually turned to be the easiest thing to patch! Because it's also the one thing that requires the most effort to translate, we'll start with them, so that the image editors can immediately get to work.

So far, the ANM format only changed with

Subterranean Animism, and has since then been constant. Script instructions have come and gone, yeah, but that's nothing we care about.

This means that, as soon as we have general dumping support, we'll also have image patching and sprite boundary dumping support. All that it now takes is a simple thanm x on every file.

This will turn the directory structure into proper filenames with "your_game_prefix" at the beginning, and create the image wiki page as text-file.
Example:

Put images.txt into proper order before you add it to the wiki! And don't forget the sprite boundary pngs.

They have been there ever since

Embodiment of Scarlet Devil, and we have to get rid of them before putting anything up for translation. Otherwise, translators can not only crash the game, but (in the case of spell cards) also possibly corrupt score.dat, just by inputting a sufficiently long spell name. And the original limits are very strict, especially when taking Greek or Cyrillic UTF-8 text into account.

And yes, there are instances where the input is actually a format string - the Music Room or the Spell Practice menu come to mind.

And yes, all four, now. The alignment hacks will not make the sprintf_rep ones redundant, as they are usually placed at the beginning of the inlined strlen() function, after the pointer to the fixed-size char buffer was loaded into a register.

The safe sprintf hacks have been pretty streamlined by now. As of

Hidden Star in Four Seasons and its… interesting vsprintf() variety with another weird parameter after the format string, they have become even simpler:

That's it. If we're lucky, there already is a pre-made hack for the exact address of x in base_tsa's global.js. If not, add it. Again, if it's more complicated than that, you're doing something wrong.

If we're extremely unlucky and the executable is compiled without stack frames (the horror…), the hack usually is safe_sprintf_esp+<value before _vsprintf + 4>.

For sprintf_rep, a function can have more than one of these!

(Also, check whether that is even necessary with this new game. ZUN has sprintf()d into fixed-size local char[] buffers ever since

Embodiment of Scarlet Devil, but hey, one can dream.)

The opcodes relevant to us probably haven’t changed (they haven’t since th18), but there might be some new instructions. Add them to thmsg if that is the case, then dump all .msg files to plaintext. Note that msg2wiki strips off the last extension from the filename, so pipe the results into %f.txt.

Don't forget to put {{#vardefine:game|thxx}} on the top of every translatable page, right after the <languages /> and TOC tags!!

Watch out for furigana text and apply the ruby tag for the correct word combinations (hint: search for commas).

Post on the wiki, and make available for translation.

If ZUN still hasn't aligned the sprites correctly. (Compare with the last game.)

In the callback to EnumFontFamiliesExA, place meiryo_strcmp_remove on the final JNE instruction. Don't do that. script_latin may be able to work around this for a number of languages, but the ones that don't depend on script_latin will still be forced to work around Meiryo so that the translations look like they do in

Double Dealing Character. This way, we're at least giving them the chance to change their locale in order to get the correct look.

Endings (for full versions only, obviously)

Not different from in-game dialogue at all.

This ties with ANM for the most consistent Touhou data format. The new one hasn't changed since

Mountain of Faith, so this step will most likely be a non-issue.

Oh boy. Ever since

Mountain of Faith, this is probably the biggest minefield in Touhou code as far as translation is concerned.

For spell name patching, we need up to four variables:

spell_id
The spell number as given by the ECL file
Found in (1) near the call to (2)
spell_id_real
The real spell number, including a difficulty offset
Found shortly after spell_id
spell_rank
A value between 0 and 3, indicating the difficulty level this spell appears in.
This is used in the result or Spell Practice menus where we only have spell_id_real and thus wouldn't be able to go back to the base ID of a particular spell.
spell_name
The register to write the translated spell name to.
This breakpoint should be set in (2) near the call to (3). By deferring spell name fetching as long as possible, we don't have to fix all the buffer overflows in (2).
Also, keep in mind that cave_exec: false is a thing (although it shouldn't be necessary anymore with deferred fetching)

While locating these breakpoints, assign labels to the "ECL parameter getter" functions according to the type of their return value.

At this point, we again depend on Touhou Toolkit; not only for the complete list of spell names with their IDs, but also to create the replacement ECLs for the Skipgame patch.

And most likely, the ECL format has changed again, adding a few new opcodes (and other stuff we hopefully don't care about), so that simply specifying the last game will give "id ### was not found in the format table" errors.

To find new and changed opcodes:

And yes, we do specify the correct types in this step. Sure, we can just add "S" everywhere and quickly get that thing to work. But we have the resources to do better, and it's not worth doing crappy work now and then expecting someone else to do the "real" thecl development work later.

At least that step is pretty straightforward.

Step 19: Enlarge the spell name sprite in text.anm to cover the entire screen

"Already? It's just card name cutoffs," you might say. However, this should take no longer than 10 minutes, since the fix will be made obvious from previous text.anm files. Especially if this game has Spell Practice, and we then even save the minute it takes to reach the Stage 1 mid-boss to test this.

Yes, this takes precedence over Skipgame. By the time development has reached this point, all stages will likely have at least some sort of draft-quality translation, and both players and translators will have unlocked all stages in Practice Mode by this point. (Or we'll at least have a semi-complete score.dat by that point.) Therefore, it is more important right now to save all proofreaders the ~25 minutes it takes to clear the game and review the endings for cutoffs and other problems, than saving them ~3 minutes for each separate stage. (Also, Skipgame is a ton of work in comparison to instant_ending.)

Keep the original distinction between st??.ecl, st??mbs.ecl, and st??bs.ecl. This allows Skipgame to be turned into a boss rush patch by simply ignoring the right files. (Maybe we should not delete the midbosses then?)

Has been necessary for every game since TH13.

With an existing trial build, we already have the technical support worked out and it only needs the addresses and small other adjustments to work with the full version. Since the audience will be much larger, we need to be all the more careful here. Thus, we port all the technical support before doing anything else.

The (outdated) workflow for this is as follows (changes in bold):