Response to https://bitbucket.org/nmlgc/thpatch-bugs/issue/68/music-theme-titles-not-being-updated because I refuse to create an account that's only going to be used once.

Anyway, probably you already know this but I thought I'd say it just in case: If you want changes to music titles to stick, you need to change the Music Room of the game the song corresponds to. So, if you were to change the Bulgarian title of Cinderella Cage, you'd need to go to TH08's Bulgarian Music Room and change something so that the title change registers. Same for Border of Life and TH07, Dark Side of Fate and TH10 and so on. It doesn't have to be in that specific song's comments, just as long as you change something in that room(like adding or removing a dot or a space in a random song comment), it will save.--Goldenhog (talk) 04:29, 17 September 2014 (UTC)

—So somebody does read my obsessive bug reports after all! Thank you for the information, I did not know to do that, nor do i know how I should have to be honest. I'll add this to bitbucket, as I can't imagine Nmlgc would intentionally design it this way.

Hello, can you share Dressmaker font with cyrillic support for russian translation of Touhou 12? --UnKnwn

—There isn't any cyrillic support, because I don't know how to edit vectors and compile them into a valid font. I cheated by typing text in English that looked as close as what I needed in Bulgarian, then rasterizing that and editing it as an image until I got what I wanted. You can see what I actually typed it in the GIMP project file I've uploaded, but if you don't have GIMP here are the "Cyrillic" letters:
"Г" is a vertically flipped "L"
"Л" is a vertically flipped "V"
"И" is a horizontally flipped "N"
"3" is the number 3
"У" is the number 9 with the top couple of rows of pixels swapped with those from "H"
"Д" is based on "Л", with two commas fused to the bottom, the first one horizontally flipped, and the bottom line is copied from the bridge of the "Н"

I also used a similar hack to translate th14's hardcoded ASCII strings (I don't think thcrap ever worked for hardcoded ASCII strings from the earlier games, so they aren't affected) by taking some symbols in the ascii.png file that the game never uses (and doesn't let you use for highscore / replay names) and replacing them with Cyrillic bitmaps made from mangled ASCII letters. Man, I had a lot more free time back then. 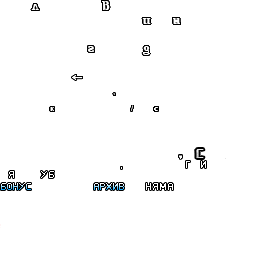 Okay, I'll try it. It not that difficult as it looks. I already used that tricks for ukrainian letters.

Btw, don't you need Bart Cyrillic font for Th8 sprites? I find it much simplier and productive to edit letters in the font file rather than in Photoshop. But I don't have a clue about bulgarian special characters.

I haven't translated anything before th10, because I was waiting for ending support, but I guess that's never happening. I don't usually care about matching the font, Dressmaker was just too unique to replace. Obviously if you want a 100% accuracy and have the original font, editing it directly is preferable, but it seemed like too much work to me for the couple of letters I needed. If I ever get motivated to work on Touhou translations again though, that font will work great, thank you for suggesting it. What program do you use to edit fonts anyway?
Kill-o-matic (talk) 19:48, 11 June 2015 (UTC)

I've used FontLab Studio 5, works just fine, but it crushed a couple of times without leaving me any backups, so maybe there exist a better choice.
UnKnwn (talk) 12:50, 17 June 2015 (UTC)